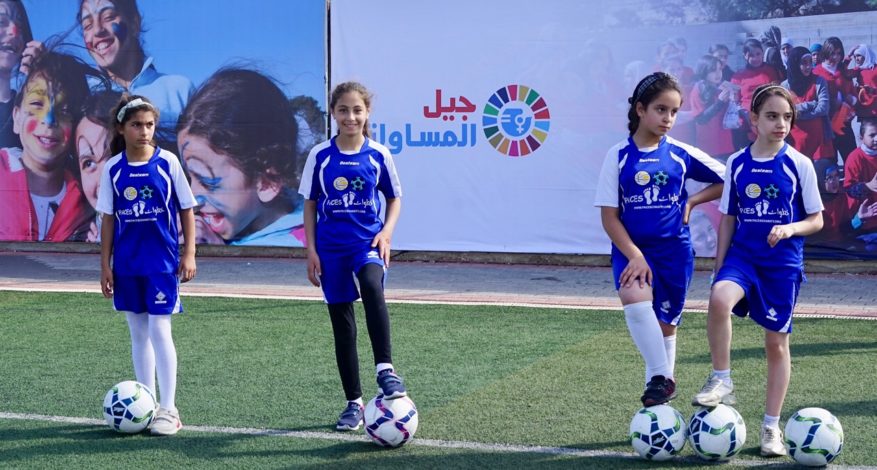 UN Women, PACES Charity, and UNICEF organized a one-day sports event today in Ramallah, Palestine, to raise awareness on the importance of promoting gender equality in every aspect of life, including sports, within the framework of UN Women’s “Generation Equality: Realizing women’s rights for an equal future” campaign, as well as the global celebration of the 30th anniversary of the Convention on the Rights of the Child.

More than 260 girls and boys participated in this special sports event. Girls and boys played mini soccer matches and enjoyed fun activities, including face painting, dancing, and photo shooting event to celebrate gender equality for all.

1 November 2019, Ramallah– On the occasion of the International Day of the Girl Child (11 Oct), a one-day special joint sports event took place today under the “Generation Equality: Realizing women’s rights for an equal future” campaign, a new multigenerational campaign of UN Women to celebrate the 25th anniversary of the Beijing Declaration and Platform for Action, the most visionary agenda for women’s rights and empowerment everywhere. The event is also part of the global celebration of the 30th anniversary of the Convention on the Rights of the Child (CRC@30). Within the framework of the Generation Equality campaign and the CRC@30, this special joint event aims to galvanize attention and action to equal participation of girls and boys in sports and make sports more accessible to all.

Ms. Maryse Guimond, UN Women Special Representative for the State of Palestinewelcomed the participants saying “Both boys and girls should be able to take part in all sport and be supported in achieving their full potential.  With the Generation Equality campaign, UN Women aims to accelerate progress on gender equality, including in sport and to mark the 25th anniversary of the Beijing Declaration and Platform for Action. In Palestine and across the world, women and girls are levelling the playing field, both in sport and beyond.”

Ms. Darin Hussein, PACES Palestine Country Manageraddressed the participants in the welcoming speech saying “We are pleased to be part of this celebration which sheds the light on one of our organization’s key objectives, which is to provide equal opportunities for both genders in sports. Realizing the great social and developmental impact of sports on children, PACES has been providing marginalized boys and girls in Palestine with healthy, structured after-school sport programs since its launch in 2006; and we are proud to be able to benefit over 4,000 children in Palestine, 50 per cent of which are female, every year.”

Ms. Genevieve Boutin, UNICEF Special Representative for the State of Palestinesaid “2019 is the 30th anniversary of the Convention on the Rights of the Child – the most widely ratified international treaty. It is fitting then that International Day of the Girl this year focuses on a girl’s right to play and recreational activities, as this forms Article 31 of the CRC. Play, sports, and recreation are not only rights, but are also powerful ways to enable children to grow up to be well-rounded and active citizens. Every child in the Gaza Strip and the West Bank, including East Jerusalem, irrespective of background or circumstance, should have an equal chance to fulfil their potential. The opportunity to actively participate in recreational activities is fundamental to this.”

During today’s event, Palestinian girls and boys played mini football matches between mixed teams of players from different areas of Palestine. Girls and boys also enjoyed fun activities including face painting, dancing, and photo shooting event. In addition, Ayat Saafeen – famous Palestinian women football player – was invited as a keynote speaker, delivering an inspiring message that all women and girls have the right to enjoy equal participation in sports